Understanding reforming chemistry begins with the catalyst itself. In this video, embark with Axens on a journey to the atomic scale into the labyrinth of pores, where the reactions occur. A single fully-saturated n-hexane molecule will be followed to demonstrate the main reforming reactions.

Gamma-alumina’s defect structure, surface acidity and high surface area make it extremely useful as an adsorbent, catalyst and catalyst support. The critical stage in its manufacture as a catalyst support for naphtha reforming catalysts lies in the control of its specific surface area and the concomitant distribution and activity of its inherent acid sites. A combination of calcination conditions and subsequent treatments sets these dependent variables during alumina manufacture.

Nanometer-sized gamma-alumina crystallites are the foundation of all modern naphtha reforming catalysts, comprising more than 95 wt% of their composition.

FIG. 1 contains a depiction of a perfectly formed gamma-alumina crystallite, the smallest grain that contains gamma-alumina’s structure, and a TEM image of actual gamma-alumina crystallites used to produce naphtha reforming catalyst. The 3-digit Miller indices, given in parentheses, represent the orientation of the crystallite’s crystallographic planes. Abutting crystallites bind together through Al-O-Al linkages to form larger porous aggregates with diameters ranging between 30 nm and 500 nm. These aggregates pack together to form even larger agglomerates with diameters ranging between 5 μm and 10 μm. 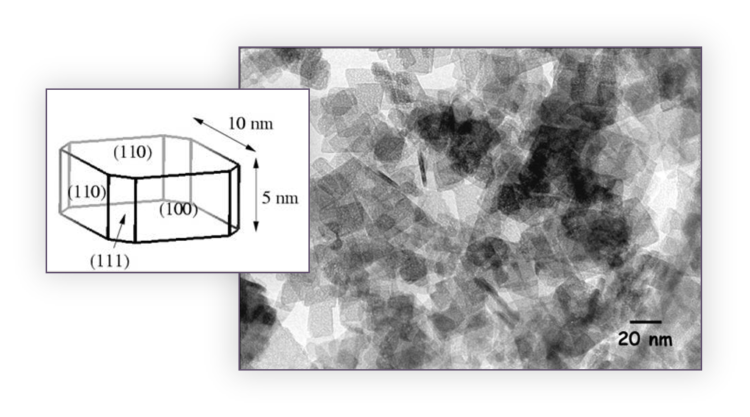 The crystallites, aggregates and agglomerates together determine the pore size, pore size distribution and surface area of the material. Pores result from the voids between the nanometer-sized crystallites and between the larger aggregates and agglomerates. Macropores and mesopores serve as inter-aggregate highways and inter-crystallite streets, respectively. This bimodal pore system provides efficient reactant ingress and product egress, and impacts catalyst activity and deactivation rate.

As depicted in FIG. 2, hydroxyls on the catalyst surface serve as weak Brönsted acid sites with acid strength inversely proportional to the O-H bond strength. Chlorine addition pulls electron density away from the O-H bond, making the H sufficiently acidic to catalyze the desired naphtha reforming molecular rearrangement reactions: chlorine promotes the acidity. On average, each nm2 of surface area provides up to ten potential Al-OH or Al-Cl sites. A fresh catalyst with 180-m2/g specific surface area and 1 wt% Cl content contains about one Al-Cl site and 1–4 Al-OH sites per nm2 of available surface area, depending on the operating conditions.

FIG. 3 – Depiction of crystallite imperfections and outcome of their removal

FIG. 4 – Depiction of crystallite imperfections and outcome of their removal

Fractional specific surface area loss due to surface atom diffusion at constant conditions is represented by the following equation:

For a given reformer with relatively constant regeneration severity and duration, fractional surface area loss can be expressed by the following simplified equation.

FIG. 6 illustrates shows how well this equation represents the fractional surface area loss for a commercial CCR catalyst that has undergone about 150 regenerations. The slope of this equation varies with regeneration severity and duration, causing different units to fall on their own respective lines for the same catalyst, as shown in FIG. 7. 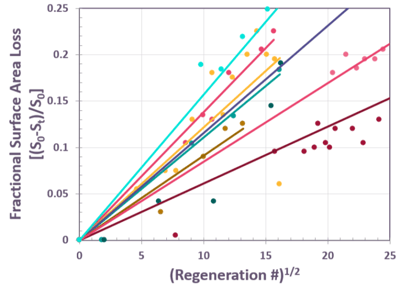 Besides providing the acid function and a platform for the Pt crystallites, the surface area also serves as a “parking lot” for coke, as well as some permanent alumina poisons. A smaller parking lot lowers the coke threshold for the onset of catalyst performance loss. It also magnifies the impact of poisons (K, Na, Mg, Ca, Si, S, etc.), since these occupy one or more of the alumina surface sites—and may hinder others—further reducing the catalyst’s effective surface area.

The indirect impacts of specific surface area loss are numerous and include:

TABLE 1 lists results from a pilot plant test of a fresh CCR catalyst (~190 m2/g) and two lower specific surface area catalysts (~160 m2/g and <140 m2/g) created by steaming the fresh catalyst for different durations. The two steamed catalysts underwent a pseudo regeneration to redisperse the Pt crystallites and establish the same catalyst chlorine content prior to testing. All three catalysts were tested using the same feed and high-severity operating conditions to achieve accelerated deactivation. The same on-stream water and chlorine addition protocols were practiced for all three catalysts. Reactor temperature was adjusted independently for each catalyst to maintain the same octane severity.

Axens is one of the world’s largest suppliers of aluminas for catalysts and adsorbents. It marries ultra-high purity raw materials with superior technical expertise developed over the last 150 years to manufacture naphtha reforming catalysts with exceptional specific surface area stability. These catalysts maintain fresh-like catalyst performance well beyond the competition.