How to Remove Mercury from Extracted Natural Gas? 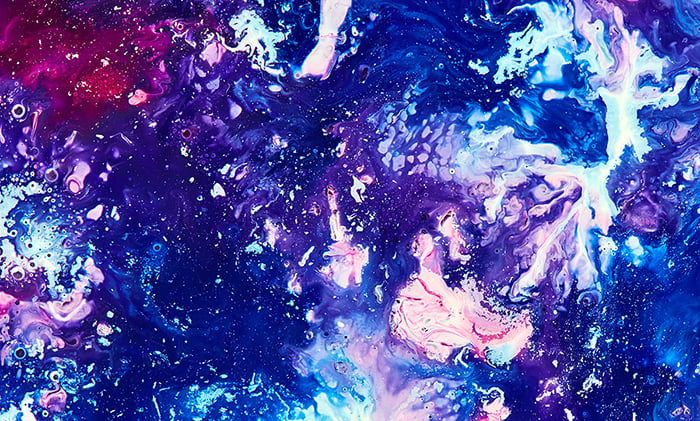 Before integrating the energy mix, natural gas need to undertake several unitary operations to fulfil transportation and final-use markets specifications, among which purification processes to remove contaminants. The degree of removal will depend on downstream requirements. One of the common contaminant is Mercury.

Mercury, a Natural Substance in the Natural Gas Composition

Mercury is a metal that occurs naturally and can exist in many different forms in the environment:

To prevent an increased release of mercury in the environment, concerted international actions have been taken such as the signature of the Minamata Convention on Mercury by over 130 parties in October 2013, taking effect on August 2017.

Mercury is naturally present in natural gas, and depending on the geological area, as per figure 1, will range from undetected level up to 300 microgram/Nm3 of gas. 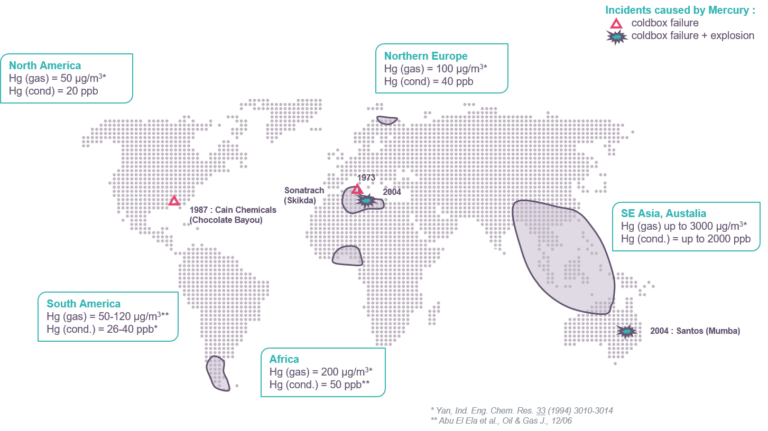 What are the Main Reasons to Remove mercury (Hg) ?

The main reasons to remove Mercury (Hg0) from hydrocarbons are Health and Environmental related issues.

Suitable personal protective equipment is required during maintenance work. For instance, the OSHA (Occupational Safety and Health Administration) sets an exposure limit for mercury up to 0.1 mg/m3 of air, which is currently enforced as an 8-hour time-weighted average.

Mercury can also lead to catalyst poisoning and thus deactivation in oil refineries and petrochemical industry.

The safest and standard solution to remove mercury occurs in a fixed-bed reactor, and is based on an irreversible chemical reaction between elemental mercury and an active phase. The active phase contains sulfur that reacts selectively with elemental mercury leading to the most stable solid form of mercury ore called cinnabar (HgS). Indeed, the spent solid needs to handle a distillation under vacuum at very high temperature in order to recover the mercury from the solid.

This active phase can either be:

In recent gas plant designs, mercury removal units are implemented as close as possible to the production wells in order to minimize mercury contamination in the effluents and along the natural gas processing chain, cf. Figure 2. This up-front position will minimize maintenance and operating expenses.

As a consequence, operating conditions are more drastic with high operating pressure and water-saturated streams which may also contain liquid hydrocarbons. In these operating conditions, the gas is at its water dew point: it implies frequent or permanent liquids entrainments (water and hydrocarbons) even if an efficient gas/liquid coalescer is implemented upstream of the mercury removal unit. Presence of liquids can have a detrimental impact on adsorbent integrity and/or performances depending on the selected solution.

Activated carbons cannot be used at this location as the active phase (elemental sulphur) is just deposited on the support and is easily leached by liquids entrainments. In addition, they are prone to capillary condensation of water and heavier hydrocarbons due to the presence of microporosity. Inorganic routes, however, including a metal sulphide as active phase ensure active phase stability under these operating conditions.

In the 90’s, solutions were made available in the market by the competition. They consist on a metal sulphide as active phase with only a binder to make the adsorbent shape. These adsorbents are called “bulk metal sulphides” and are not porous. Even if this kind of adsorbent contains a very high active phase concentration, several drawbacks can be mentioned:

Axens was a pioneer in the development of alumina-based adsorbent. Launched in the 70’s, this metal sulphide on porous optimized alumina carrier presents a very high mechanical resistance, thanks to:

Axens’ AxTrap™ Mercury Series offer a complete portfolio of adsorbents for different level of Mercury contamination and gas conditions, for a wide range of applications: dry gas, wet gas (high operating pressure) and liquid phase operation. The adsorbents physical properties are optimized to minimize diffusion issues and maximize mercury trapping capacity. Once trapped, Mercury is then firmly bound within the product thanks to a proven manufacturing process and stringent mercury removal specifications can be reached. 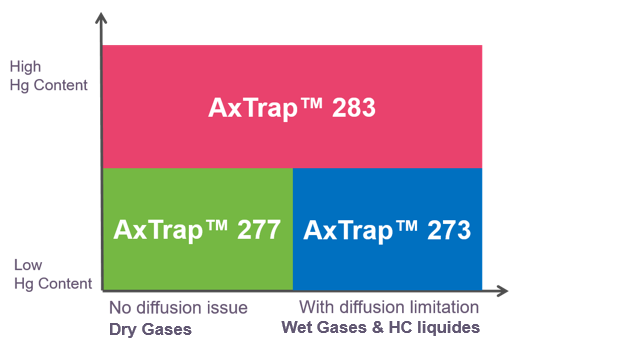